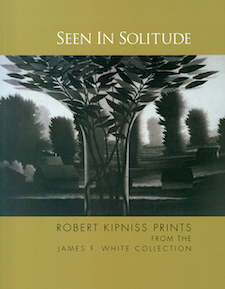 "Seen in Solitude: Prints by Robert Kipniss," by Daniel Piersol

Published by the New Orleans Museum of Art, 2005

Seen in Solitude is the hardcover catalog of Kipniss's exhibition at the New Orleans Museum of Art. It contains eighty-six reproductions of the artist's lithographs, drypoints, and mezzotints created between 1968 and 2005, along with images of paintings and photographs.

In Seen in Solitude James White recalls his initial discovery of and abiding fascination with the artist's work. Curator Daniel Piersol's critical essay examines Kipniss's prints, drawing comparisons between his imagery and that of such practitioners as George Inness, Mark Tobey, and Rene Magritte. And in a "soliloquy," the artist reminisces about printmaking, his career, and life.