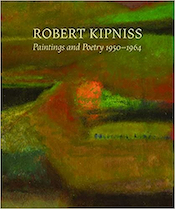 Published by The Artist Book Foundation, 2013

Robert Kipniss: Paintings and Poetry, 1950-1964 has many reproductions of early Kipniss drawings and paintings as well as forty never-before-published poems.

It is the result of Kipniss's months of revisiting his writing of more than half a century earlier, large numbers of poems that were essentially forgotten. "Some of the poems are straightforward, some are infused with surreal irony, and some are angry," wrote Kipniss in "Comments by the Artist and Poet."

As he read the poetry and looked at his early paintings, he discovered relationships between them. "I could clearly see that my work in the two mediums had come from very different parts of my psyche and that, while they were both in themselves completely engaged, they were not in any way integrated. When I stopped writing my vision was no longer divided between word-thinking and picture-thinking: these approaches had merged and in expressing myself I was more whole."

"At first glance, Kipniss's poems and paintings from his first decade of serious work would seem to have nothing to do with one another--right hand and left hand--each the product of a different part of the psyche," wrote Robin Magowan in "Remembrance and Prophecy: The Journey of a Poet-Printmaker." "In retrospect, it may seem that Kipniss's decade-long immersion in the creation of poetry allowed him to give his art the darkness it had previously lacked."