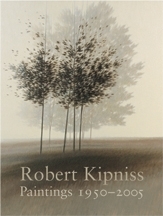 Essay, "Notes from the Studio," by Robert Kipniss

Robert Kipniss Paintings 1950-2005 presents the first comprehensive investigation of this artist's painting, from the distinctive and original style found in his earliest works, to those of the 1970s and 1980s when he was consolidating and refining his visual vocabulary, to the recent achievements of a mature artist.

Essays by E. John Bullard and Richard J. Boyle, and by Kipniss himself, introduce us to an artist with an intensely independent vision and methodology, as well as his process and inspirations, and the profound impact of his art on viewers.

The book has one hundred and two reproductions of Kipniss paintings, almost all of them in full color. In his essay, "Notes from the Studio," Kipniss wrote that as this book came into being "I am surprised to see the wholeness, the one shape, formed by the various points of my gradual evolution."

"During the ten weeks the Kipniss show was on view in New Orleans, I had the pleasure of seeing the works numerous times," wrote E. John Bullard, director of the New Orleans Museum of Art. "I thought of Zenga, paintings by Japanese Zen Buddhist monks and priests...The twilight lyricism of many of his landscapes, with muted colors and soft edges, could almost be scenes in Japan."

"If the work of the fifties and sixties was exploratory, searching, the work of the seventies and eighties was consolidating and refining, the forming of a vocabulary for the expression of his ideas. The work of the nineties to the present represents the achievement of a mature artist, the marriage of grammar, syntax, and vocabulary to fulfill the intensity of his vision; in Rilke's words, 'not to form, nor to speak, but to reveal'," wrote Richard Boyle, former director of the Pennsylvania Academy of Fine Arts and adjunct professor of art history at Temple University in Philadelphia.